Our 10 Berth Dog Transport trailer was stolen on 9th July 2018 from Bacchus Marsh Road, Lara. Victoria. A $1000 reward is offered for information leading to the return of this trailer or prosecution or the people that took it. Queensland Rego 488QTA. Last seen near Bendigo & Heathcote, Vic. 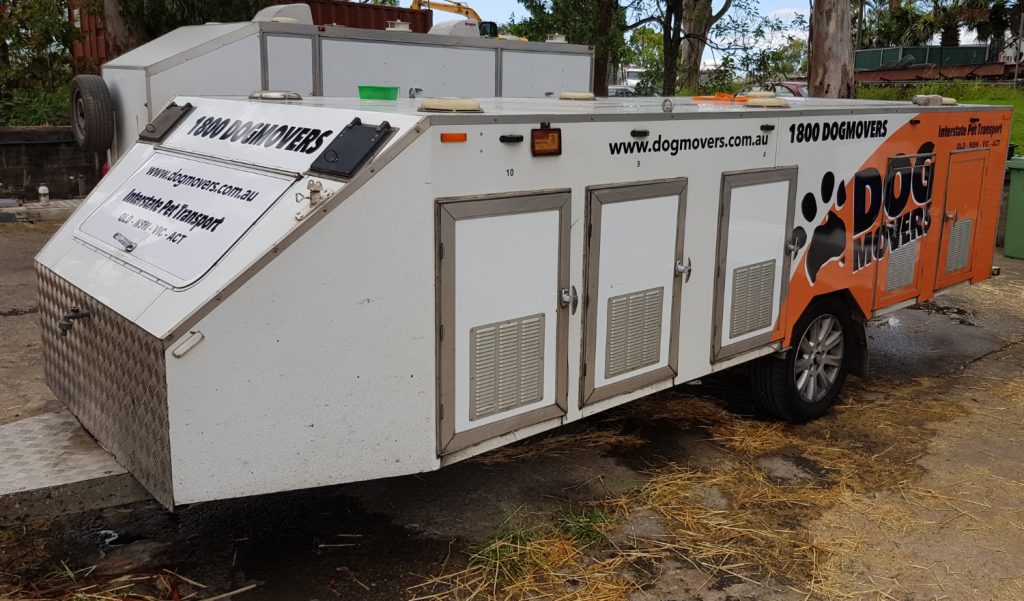 It was last seen in the Bendigo and Heathcote area on 11th July 2018 by at least five people following an extensive Facebook campaign, it had a blue tarp covering the rear of the vehicle, the rego and the signwriting. A man & woman were seen stopped and adjusting the tarp in Heathcote near the bank. Possibly travelling north and there was a less definite sighting at Echuca heading towards NSW so may be interstate. But my feeling is that it is could still be in the greater Bendigo area somewhere, probably parked on a private property and possibly that would be a Greyhound property. 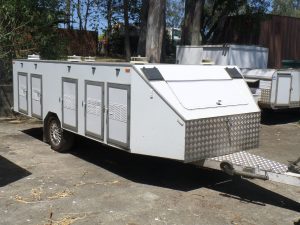 It was last seen with the Orange signwriting pictured but I have included pictures of it without that and behind a larger SUV to give an idea of the size. Distinctive features are the five doors each side, very square construction, single axle and larger size compared to normal dog floats. It is about 6m long in total, 1.8m wide and taller than normal dog floats. It is a trailer we made ourselves so we will be able to readily identify it from pictures and it is quite different to most other dog floats out there. 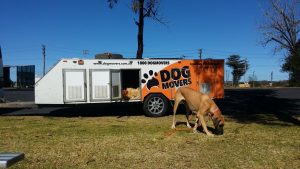 It will be of limited use to whoever took it, it was built for long distance transport but they will not be able to use it for that without being really obvious. The most likely scenario now is that it will be offered for sale at some stage as it will stand out too much if they try to use it to go to a Greyhound track, dog show or anywhere they would need such a large trailer. Let us know if you are offered it for sale. Send us pictures if you are unsure. 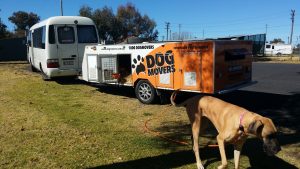 This trailer is distinctly different to our other floats. This is the only one that had the orange signage similar to what is on our vans. It is the only large trailer we had with one level of cages. Our other large floats have two levels with upper & lower doors on both sides. It has 10 cages of varying sizes, a water pump in the storage area in the front. Very square in construction with an aluminium chequerplate floor. It has a water tank underneath, the filler is just behind the RH wheel and a tap on the front.

It has been reported to police in multiple states. Could anyone seeing the pictured trailer contact Dogmovers immediately on 07 5530 2710 or 0418 775 456, via Facebook or email. We are offering a $1000 Reward for information that leads to the recovery of the trailer or the prosecution of the thief. Thanks, Dave

Hi Guys It takes a team to rescue a Great Dane, Dogmovers are very much a big part of that team, I just have to…

I want to say how impressed I am with your service and the care that you showed me, as well as my dog. My dog,…

I had to make a late booking yesterday at 12pm, Dogmovers said our new puppy would be picked up between 3-6pm and was picked up…

Hi, Just wanted to say we were very impressed with the service we have received from Dogmover’s. The guy who delivered them was lovely and…

Dear Dogmovers, we had a kitten delivered to us on Monday (from Bundaberg to Burpengary). I would just like to thank you for an excellent…

Sierra, thank you so much for a wonderful service! All the staff I dealt with were wonderful, the transportation trailer was amazing, and most important…

Just wanted to write and thank Paula for her hard work yesterday, with Arnie the great dane that she picked up from Cairns and dropped…

The Norris Family and Samson

Just thought i'd send you a HUGE thank you for the Transportation of our Boxer pup Samson. On pick up, once the trailer was open…

I would like to thank you guys for the delivery of my new hound from Bathurst NSW to Mackay QLD. Although I have used your…

Hi Sierra, Thank you for getting the kitten to us on Friday. Your drivers were on time to the minute. Their truck was clean and…

To all the staff at Dogmovers, congratulations on your wonderful Business, such quality care of our pup while he was with you Your vehicles are…